The results from this year’s International Wine and Spirits Competition show a sweep of the golds for Buffalo Trace in the bourbon category. 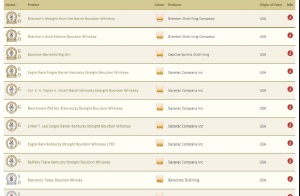 You all know how much we here at BOTB love Buffalo Trace, but this damn impressive. I combed their website to see how spirits are scored, and they do a series of blind tastings as well as a chemical analysis. They don’t give the parameters for the chemical analysis, but I’d sure like to know. We’ve had a ton of good bourbons this year, and would agree with a lot of these awards, but there’s a lot I would have liked to see get a gold if not at least a silver. Also, Benchmark gets a gold, really? I mean, it’s good, but its a 4 year old that beat out Pappy 20 year (awarded silver outstanding). Most of their tasters come from the Scotch Whiskey world; could it be that Buffalo Trace makes a very approachable product for people coming over from Scotch?

What do you guys think? Let us know in the comments and if you want to check out the awards yourself, the link is below. Cheers!